So I recently read Faking Normal by Courtney Stevens. 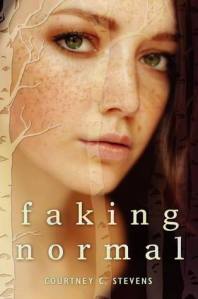 An edgy, realistic debut novel praised by the New York Times bestselling author of Between Shades of Gray, Ruta Sepetys, as “a beautiful reminder that amid our broken pieces we can truly find ourselves.”

Alexi Littrell hasn’t told anyone what happened to her over the summer by her backyard pool. Instead, she hides in her closet, counts the slats in the air vent, and compulsively scratches the back of her neck, trying to make the outside hurt more than the inside does.

When Bodee Lennox—”the Kool-Aid Kid”—moves in with the Littrells after a family tragedy, Alexi discovers an unlikely friend in this quiet, awkward boy who has secrets of his own. As their friendship grows, Alexi gives him the strength to deal with his past, and Bodee helps her summon the courage to find her voice and speak up.

Let me just say everyone who can read should read this book!  It was AMAZING!  I don’t know how she does it, but Courtney is able to make you want to stay throughout the whole story.  From the synopsis, anyone could have a guess as to who the main love interest is.  It’s Alexi and Captain Lyric.  But who in the world is Captain Lyric, this person who seems to know exactly what song she needs that day?

I thought the plot was good too.  She threw in some twist that most readers don’t expect if they have read a lot of romance.  I had my one person that I was rooting for the whole time.  At times, I just wanted to take Alexi and yell at her to be with this guy!

Alexi and Bodee developed a ton as characters.  They relied on each other and built the other up.  I think if Bodee hadn’t of come into her life when he did, the story would have been nowhere near as interesting.

I started The Naturals by Jennifer Lynn Barnes yesterday and am in the middle of it right now.  Then I’m doing a buddy read on Goodreads on the book Before I Fall by Lauren Oliver today.

Don’t forget about the contest going on right now.  Here is the link to the original post with all the information: https://abookagirlandablog.wordpress.com/2014/08/26/contest-time/.