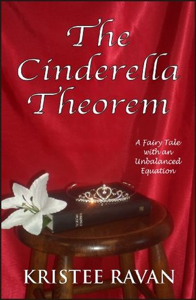 Fairy tales are naturally non-mathematical. That is a fact, and fifteen-year-old Lily Sparrow loves factual, mathematical logic. So when her mother confesses that Lily’s deceased father is (a) not dead, (b) coming to dinner, and (c) the ruler of a fairy tale kingdom accessible through the upstairs bathtub, Lily clings to her math to help her make sense of this new double life (1 life in the real world + 1 secret life in the fairy tale world = a double life).

Even though it’s not mathematical, Lily finds herself being pulled into a mystery involving an unhappy Cinderella, a greasy sycophant called Levi, and a slew of vanishing fairy tale characters. Racing against the clock, with a sound mathematical plan, Lily attempts to save her fairy tale friends while proving that normality = happiness.

We’re looking for reviewers! You don’t need a blog to sign up, but you do need to at least post a review on Amazon. Other sites (blog, Goodreads, etc.) are also appreciated. Reviews must be completed by the end of November. To sign up, please fill out this form.

Kristee Ravan lives in Oklahoma with her husband, daughter, and pet fish, Val (short for Valentine). She wanted to be many things as she grew up including a general, an artist, and an architect. But she never bothered to say, “I want to be a writer when I grow up.” She was always writing stories and thought of herself as a writer anyway. She sent her first story to a publisher in the sixth grade. (It was rejected – in a nice way.) When she is not making up stories in her head, she enjoys reading, juggling, green smoothies, playing dollhouse with her daughter, and hearing from her fans. You can contact Kristee at the facebook page for her Lily Sparrow books: The Lily Sparrow Chronicles.

5 copies of The Cinderella Theorem (print for US winners, ebook for international winners)

I absolutely loved The Cinderella Theorem!!  It was amazing.  I thought it was so cool how Lily grew as a character and learned all these different lessons.  The footnotes that the author added at the bottom of the pages were so great and helpful.

Most people, when hearing the word theorem, think I don’t want to read that.  It’s about math.  That is partially true, but it only has math because Lily loves math and understands that better than anything else.

I would definitely recommend this book for anyone that has a love for fairy tales and sweet moments.